When Freelancers on Upwork are Actually Agencies and Groups

When companies specifically request “freelancers only” on Upwork, we have a reason. Sometimes, we want to protect our intellectual property from theft and misuse. We may want the dedication and flexibility that comes from a single, full-stack engineer integrated into our existing time. Or, we may simply want the lower rates that come from working directly with a contractor and cutting out the agency. Whatever our reasons, we do expect that when we indicate our preference for freelancers only, marketplaces like Upwork will prevent agencies from applying to our jobs, wasting our time, and potentially even compromising our intellectual property.

But there is an epidemic of deception on Upwork and platforms like it. Contractors have realized that many companies specifically request freelancers only, and have found countless ways around the restriction. By our estimates, upwards of 40% of all jobs posted specifically request freelancer-only bidding in Upwork. And because Upwork has no effective mechanism for vetting contractor accounts, the practice continues.

Why does it matter? It matters for many reasons.

Candidate quality. Firstly, it runs contrary to the wishes of the hiring clients. If I want to hire a freelancer, and I check a box indicating that agencies are not allowed to bid, then I should expect to interview only contractors. I should not expect to run into agencies as I am interviewing applicants. But I do. Constantly. Not only is it frustrating and a waste of my hiring staff’s time, but given that we only have a short window of time to fill a post, the time we spend scouting out and removing agencies out is time we lose vetting candidates who are actually eligible for the position. I believe this means my team ends up with lesser-qualified candidates.

Competition. Submitting bids is time-consuming. It takes time to evaluate client requirements and thoughtfully articulate why one is the most suitable choice for a project or position. In posting a job, I expect considerate responses. But most of them simply are not. Instead, I get copious numbers of dense, verbose copy-paste templates. Why? Because as I said, proposals are time-consuming, and when you are an independent contractor, you must use that time wisely. And when you are competing with a hoard of agencies masquerading as independent contractors, staffed by low-paid administrative staff who are paid to spam every job post, the independent contractors who value their time are going to slowly bow out. And they have, leaving clients to sift through the hoards of applicants pretending to be individuals, but who are really just a rotating staff.

Intellectual property. Have you ever searched for “buy clone script” on Google? If you have, you would know that you can buy entire web applications built in virtually any language, and for any purpose. Marketplaces, job sites, and digital clones of virtually every business model can be had for as low as $50 and repurposed however you want. We recently purchased an entire freelance marketplace clone and repurposed it for an internal project. It cost us $60 and we saved thousands of dollars. While this was great savings for us, we have been on the opposite end when we found a real estate management portal we had developed up for sale on one of these websites selling clone scripts. It is no secret how these scripts are procured: they are stolen from agencies and other consortiums who were commissioned to build them on marketplaces like Upwork. While it is not only agencies that engage in this kind of theft, they have been behind the vast majority of proven cases. Some companies exist solely to acquire, funnel and then resell apps paid for by unwitting clients to these script marketplaces. When agencies and groups pose as individual contractors, it is a massive breach of security. In the case of coding, it means that my code repository will end up on multiple machines of people I have never met and have no signed agreement with. The code which we have paid for can be stolen, misused, or simply distributed unknowingly to bad actors or competitors.

Work quality. Perhaps the most pernicious effect is the quality of the service received. These groups and agencies only create individual front-accounts if there are financial incentives to do so. So when a client hires one of these imposter freelancers, their work is being distributed to the lowest-paid juniors to complete the job. Needless to say, the quality of the coding or other deliverables suffers when inexperienced juniors are given the work.

So how do they do it? Since there are very few checks by Upwork, virtually anyone can create an account. Agencies and groups create individual accounts, when in fact they are simply fronts. Once work is secured, they will distribute the work they receive inward into an agency or collection of friends 0r colleagues. Some of these groups are actually massive development farms, and others are simply friends and co-workers running side-hustles. They always nominate one person as the contact — this is the person whose face you see.

There are many ways to tell if you are actually communicating with a group.

We recently had an interaction with one such Indian contractor on Upwork who had a nearly 5-star review and had earned well over $100k according to her profile. After a few weeks of working with her, we began to suspect that she was one of these front accounts and so we began looking for confirmation. We scrutinized her activity, and found that she frequently had a screen-sharing application running on her computer, which we could see in the screenshots captured by the Upwork time-tracker. We surmised that she was distributing the work we gave her to less-qualified, lower paid workers. Upon examination of her account, we also found that she had nine simultaneous jobs ongoing — far more than a single contractor can generally handle. So, we let her go immediately and removed her access from all of our repositories and code-sharing groups. 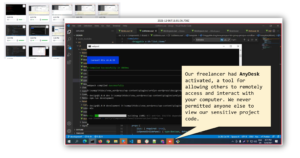 Aside from getting caught, there are no visible disincentives for agencies on these platforms to cease this behavior. In fact, there are massive incentives — the number of jobs they can apply for doubles. It also allows agencies who publish higher hourly rates, to snatch lower-paid work that still delivers considerable profits under an alias account. And for Upwork, it means they can deliver a higher number of bids on every job, something they clearly think is important to their clients. In the short term, the only loser in this equation is the clients who are posting and distributing jobs to individuals who are actually groups and agencies. And while the revenue of these freelance marketplaces continue to outpace other sectors, in the long term this is just one of the many ways in which the quality of outcomes offered by established freelance marketplaces like Upwork will continue to decline.

Upwork and the Effect of Price Gouging

Upwork is the most popular labor marketplace. It has hundreds of thousands of clients looking…

Although Upwork publishes some of its success stories, as a publicly-traded company they have conspicuously…

Last updated July 1, 2021 In the oil industry, the difficulty of extracting and processing…

Start your project with us

© 2023 "Prospus" is a wholly-owned subsidiary of Kaamfu Inc. All Rights Reserved.

Close Menu
Prospus.com uses cookies to help make the website better. You can change your cookie settings at any time, or we'll assume you're ok with this. Read More

This website uses cookies to improve your experience while you navigate through the website. Out of these cookies, the cookies that are categorized as necessary are stored on your browser as they are essential for the working of basic functionalities of the website. We also use third-party cookies that help us analyze and understand how you use this website. These cookies will be stored in your browser only with your consent. You also have the option to opt-out of these cookies. But opting out of some of these cookies may have an effect on your browsing experience.
Necessary Always Enabled
Necessary cookies are absolutely essential for the website to function properly. This category only includes cookies that ensures basic functionalities and security features of the website. These cookies do not store any personal information.
Non-necessary
Any cookies that may not be particularly necessary for the website to function and is used specifically to collect user personal data via analytics, ads, other embedded contents are termed as non-necessary cookies. It is mandatory to procure user consent prior to running these cookies on your website.
SAVE & ACCEPT