The Reality beyond the Fantasy of Human–Robot Symbiosis

Although robotics and artificial intelligence software continue to mature, we are still far from a true symbiosis between people and machines. In 1960, J.C.R. Licklider wrote about the possibilities of human–robot symbiosis in his classic paper, “Man–Computer Symbiosis.” Over half a century later, let’s consider how far we have come and explore the future of human–robot symbiosis.

In his 1960 article, “Man–Computer Symbiosis,” J.C.R. Licklider explored the possibilities of humans and computers working in cooperative association to more effectively perform tasks that humans can’t perform alone. Licklider described this cooperation as being similar to the way a fig tree is pollinated, where the transfer of pollen from the anther to the stigma takes place as a result of “an intimate association, or even close union, of two dissimilar organisms—a tree and an insect; and where they constitute not only a viable but a productive and thriving partnership.”

Over half a century later, our association with computers is closer than ever. We have powerful handheld internet-enabled computers than many of us carry around constantly. We have instant access to an immense pool of online databases, and going forward, we will be increasingly connected to more and more internet-enabled objects, moving toward a ubiquitous internet. Fortunately, we’re also able to process massive amounts of electronic data faster—much faster—than Licklider could have imagined. We’ve also become adept at letting computers do a lot of our tasks for us, and they do so quite effectively.

However, even though we’re able to process datasets faster, we still struggle with compatibility issues among different formats and deriving accurate outcomes from the tremendous amount of data available to us. The idea of managing billions of connected devices all around us is still daunting. So, how far have we really come?

Human-like robots have always fascinated us. But humanoid creations are still more of a fantasy than something we can find walking around our living rooms. Although continued developments in robotics and artificial intelligence are enabling robots to acquire new capabilities, they are still far from having the intelligence to perform most tasks as accurately as humans can, let alone replace humans altogether. Seeing a robot that can climb up a set of stairs without falling over, or other simple tasks that humans do a hundred times a day, still captures our imagination. That isn’t very impressive, if you think about it, but robots are improving, and engineers are using them to assist humans in a variety of ways.

For example, a robot called Baxter, produced by Rethink Robotics for use in food processing, is designed to work safely alongside humans while using a 3-D vision system and other sensors to perform tasks that require great precision, such as estimating the location of a chicken’s joints and tendons, that is, “feeling” whether it is cutting meat or bone. This two-armed robot, trained with machine-learning software, can independently assemble a salad, precisely slicing up different foods and moving them around. 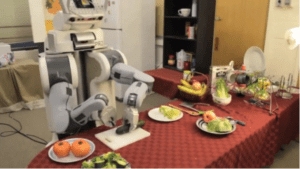 When robots will be able to complete precise tasks like these at the same pace a human being can is unclear. But engineers are working to prove that robots will soon be able perform at a normal human speed, or possibly even faster.

Amazon’s newest fulfillment center, located in the township of Robbinsville, New Jersey, is an exciting display of industrial transformation with humans and machines working in carefully coordinated harmony. Amazon has actually designed the new warehouse specifically to work around its robots, as they are still incapable of working freely or on tasks that require fine manipulation or improvisation. Because of that, these robots do still rely on humans, but we’re also beginning to find greater degrees of human reliance on robots. 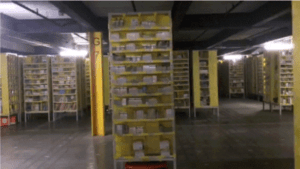 The Safety of Human–Robot Symbiosis

In a recent incident, a contractor was setting up a stationary robot, when it grabbed and crushed him against a metal plate. This raised a critical concern: Can humans and robots coexist safely? The initial conclusions surrounding the incident indicate that “human error was to blame, rather than a problem with the robot, which can be programmed to perform various tasks in the assembly process.” Many claim that arguments about a “robot killing a human” are misleading, and that holding robots accountable for accidents shifts the blame away from the humans who designed it, or human operators who may have been using, or rather misusing it. One might also argue that such incidents are currently rare because robots themselves are still rare, but as more robots work with humans, these incidents may increase—not because robots will develop emotions or intentions to destroy the human race, but because of human error.

We can’t say for sure when humans and robots will be able to work in close harmony as Licklider imagined so many decades ago. Some people hate robots, fearing they will take over their jobs, while others think they are very bad for the human race, only to later change their minds. As with any new technology, the public’s initial reluctance may stem from a lack of clarity about how humans can use robots, and how robots will ultimately aid human society. Whether or not a deep human–robot relationship will be allowed to form isn’t really at issue—in many ways, it already exists with our reliance on computers and will quite certainly grow over time. The degree of growth is what will reveal itself in the years to come.

Out with the New, in with the Old

Out with the New, in with the Old

Start your project with us

Close Menu
Prospus.com uses cookies to help make the website better. You can change your cookie settings at any time, or we'll assume you're ok with this. Read More

This website uses cookies to improve your experience while you navigate through the website. Out of these cookies, the cookies that are categorized as necessary are stored on your browser as they are essential for the working of basic functionalities of the website. We also use third-party cookies that help us analyze and understand how you use this website. These cookies will be stored in your browser only with your consent. You also have the option to opt-out of these cookies. But opting out of some of these cookies may have an effect on your browsing experience.
Necessary Always Enabled
Necessary cookies are absolutely essential for the website to function properly. This category only includes cookies that ensures basic functionalities and security features of the website. These cookies do not store any personal information.
Non-necessary
Any cookies that may not be particularly necessary for the website to function and is used specifically to collect user personal data via analytics, ads, other embedded contents are termed as non-necessary cookies. It is mandatory to procure user consent prior to running these cookies on your website.
SAVE & ACCEPT